Try and solve puzzles beneath the watchful eye of the mountain hut warden. Think you can get out...

Ayer, between past and present

From the thirteenth century, Ayer, just like the main villages in the valley, formed a community and became, in the nineteenth century, a municipality with a Bourgeoisie.

Beginning probably in 1750, and until 1905, the people of Ayer regularly went by foot, on a pilgrimage to the Sacro Monte of Varallo ( Val Sesia, Italy ).

Ayer, located at the entrance of the Zinal valley was an important village, the seat of the municipality whose territory stretched from Zinal to Les Morands ( near Vissoie ). Under its leadership, the former mayen of Zinal,( small houses associated with mid-mountain pasturing ) a summer tourist destination as of 1850, was transformed into a winter resort beginning in 1967, the year of the completion of Zinal- Sorebois cable car line. This development resulted in the creation of jobs in Zinal and the gradual loss of the influence of Ayer.

In 2008, the town of Ayer merged with other towns of the valley, to form the municipality of Anniviers.

The Anniviards lived between the valley of the Rhone, and the mountains, according to the seasons. Around December 15, part of the inhabitants of Ayer went up to Zinal for a month. A schoolteacher then resided in Zinal and a second one remained in the village. The priest went to celebrate Mass in Zinal. In March, the people went down to Sierre to work in the vineyards. In the village, guards remained, as did the elderly. Easter marked the beginning of the cleaning of the meadows and planting of fields. By June 10, they went up to Zinal or to the mayens to graze cattle on the meadows of the « Société de Zinal » until the inalpe at the end of June. On November 26, they went down to Sierre, for the Sainte-Catherine Fair to buy the necessary provisions for the winter. This pattern of movement called the remue or remuage lasted until the years 1950-1955.

In the years 1950-1960, the construction of the Moiry dam, and the electrical stations at Mottec and Vissoie, significantly improved the access roads and provided stable work.

In the years 1950-1960, the construction of the Moiry dam, and the electrical stations at Mottec and Vissoie, significantly improved the access roads and provided stable work.

The arrival of winter tourism profoundly changed the lifestyle of inhabitants : the Anniviards stopped their seasonal movement and the ski resorts came to be the center of interest at the expense of the villages. The neighbourhoods of Sierre were inhabited yearround.

The farming world changed slowly to adapt to this new configuration. While living the old farming life was no longer possible, the will to continue the maintenance of meadows and keep cows for milk led to the construction of a community stable in 1972.

Ayer, between past and present
3961 Ayer 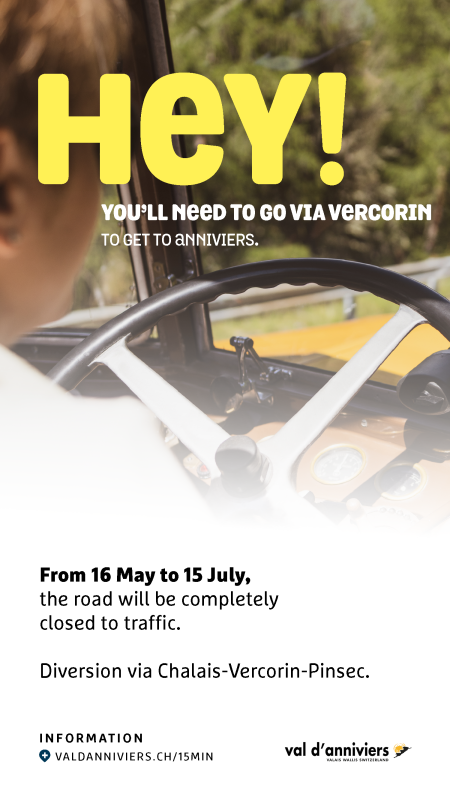